Posts tagged ‘rigor in the classroom’

The Problem of the Week(POTW):It’s Not Just Math! 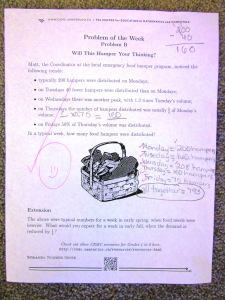 The Problem of the Week!

He ran across the room and yelled, “I got it!
Poking at his head, he said, “I used my brain and I got it!”
What did he get?
He had just solved the Problem of the Week. :)...READ MORE

“Ouch, My Brain Hurts!” Rigor in the Classroom!

I watched this video, and cracked up! I was trying to find articles about rigor and bumped into this video. It’s a bit long in making its point, but I get it. This poor teacher is being hounded by her principal, to “perform” , so that her students can learn the parts of speech.

Self Fulfilling Prophecy!(Gloom and Doom)

I remember when I was in college a LONG time ago, we learned about the self-fulfilling prophecy. I don’t recall the professor who taught it, but somehow it has managed to stay in my head after all these years.  If you believe it, it could happen, good or bad, positive or negative, our expectations influence those around us. When the professor introduced this concept, he wanted to emphasize the damage we could do to our students if we had preconceived notions about them and what they were capable of.

In the education field this is particularly true.  We have a huge impact on what happens to the hundreds of lives who sit in our classrooms, year after year.  How many times have we heard successful people credit a teacher who believed in them? Teachers who refused to believe that  a particular student would amount to nothing?

Too many times I have heard comments about what “the population” of a school is,or is not, capable of.  Seen students who were judged by the behavior that they exhibited in prior years. Trying to get teachers to incorporate technology in their classrooms, and  being told that the younger students “can’t” do it. Determining the intelligence of  a child based on the behavior of a parent or sibling.

I have always had high expectations for my students, I refuse to lower my standards to fit a mold others think they fit in.  I hold them responsible for their education and believe that they are capable of so much. And I have found, repeatedly, that most of my students rise to my expectations. The new term  is “rigor.” Why is it new? Why isn’t this something we should have always expected from our students? From all of our students?  If we continue to teach students according to our expectations of them, and our expectations are low, what will the results be? If the Robins are challenged every day, and the Sparrows aren’t, when do the Sparrows get a chance to spread their wings, to fly beyond our enforced limits?

I have a student who was truant last school year.  When he arrived in my class, the pattern began again.   He would show up for school twice a week, if that.  According to statistics, the general consensus is that he will eventually drop out of school, and his life will be pretty bleak. He might, he’s 13 in the 5th grade. But now, I am not going to worry about that prophecy, right now I am going to believe that he can, and will, succeed.   He’s only missed one day in weeks. His grades have improved, he is willing to share his thoughts and his work. He raises his hand and participates in discussions. He High 5’s me every morning and afternoon. (The afternoon High 5 is accompanied by the word, “tomorrow.”) He’s so much more than a statistic to me.

I know, it’s pretty idealistic. “I believe, and if I believe , it can happen.” I realize this is not always the case. But wouldn’t it be great if our prophecies were positive, and most of them were fulfilled?